This is the name of the expedition with which I will complete my project of retracing, with the only human strength, the journey of the Gold Rush pioneers in the Great North, connecting all the seas and oceans around Canada and Alaska, 120 years after the beginning of the gold fever. 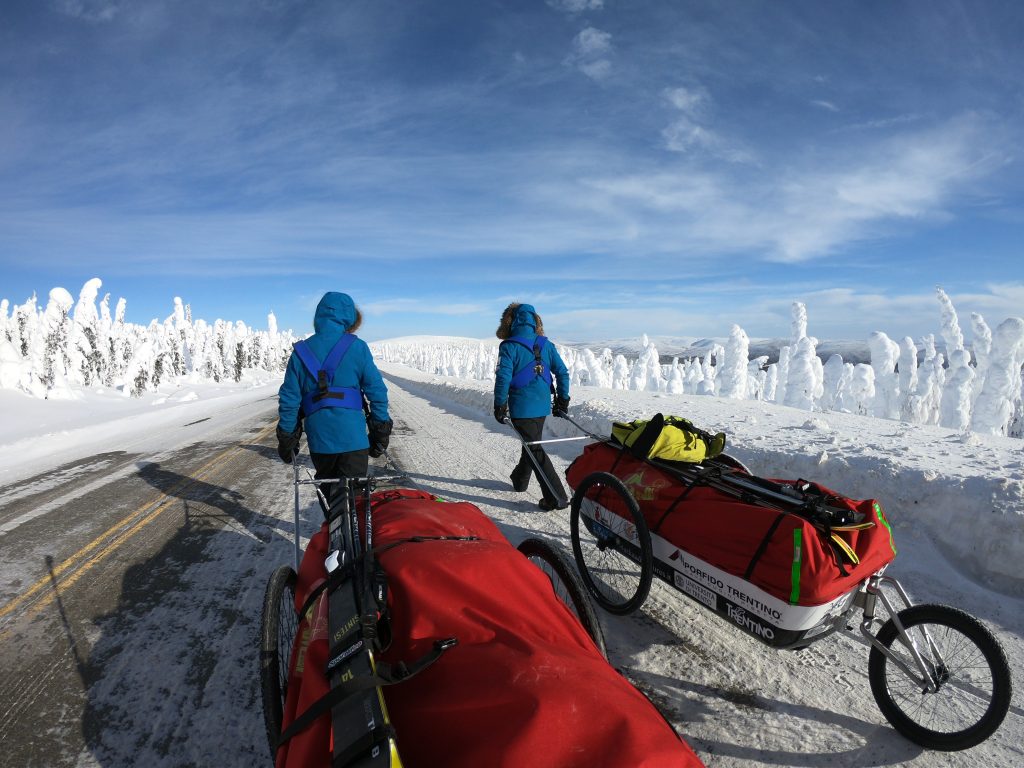 The first part – In the initial part of this new adventure we will be on skis hauling a sled on the frozen Yukon and Tanana Rivers. We will start from the First Nations village of Fort Yukon, above the Arctic Polar Circle, where I had arrived with Fulvio by canoe in the summer of 2014, to reach the town of Nenana, 145 km away from Manley Hot Springs where my 1997 expedition began. With this first stretch of the expedition, about 800 kilometers long, we will complete the central part, still missing, of the “Gold Rush Route”.

The sled– We chose to use the sled because it is an excellent means of transport for equipment and food, but also to walk in the shoes of the pioneers of the late nineteenth century. It has been designed from the students of the Department of Industrial and Materials Engineering from the University of Trento, Italy.

The second part – it will start in Nenana. It is a small town as well as the starting point of the “Alaska Railroad”, the famous railway that connects it to Anchorage. Once arrived to this village we will buy food and gas supplies, take on new equipment, and probably leave our skis. From here we will continue on foot towing the sled specifically equipped with wheels on the George Parks Highway for 491 miles to Anchorage. It’s Alaska’s largest city, with an airport and harbor on Cook Bay, the most important place in central and western Alaska.

Conclusion of the project – This expedition, combined with the mountain bike journey on the Dalton Highway in 1993, represents the Alaska crossing from south to north, from the North Pacific Ocean and the Gulf of Alaska to the Arctic Ocean in the Beaufort Sea.

– The cold. Temperatures in the first section of the expedition will be around -20°C/-35°C, but they may also drop to 50°C below zero;
– Thin ice, “overflow” (water over ice) and open water areas. These are insidious conditions that can be found on rivers in sub-arctic regions and in Alaska;
– The wind and the wind chill factor, the perceived decrease in air temperature felt by the body due to low temperatures and the flow of air;
– The significant temperature variation. In Alaska, temperature may range from -40°C to above zero in the same day; on several occasions I have experienced variations of even 50°- 70°C in a 24-48 hour range;
– Snow represents a key factor too. Wind storms, heavy snowfalls, soft or powder snow can slow us down or even stop us;
– Grizzly bears. If the warm season comes early they might come out of hibernation looking for food. Wolverines are very aggressive. Elks can be a danger as well.