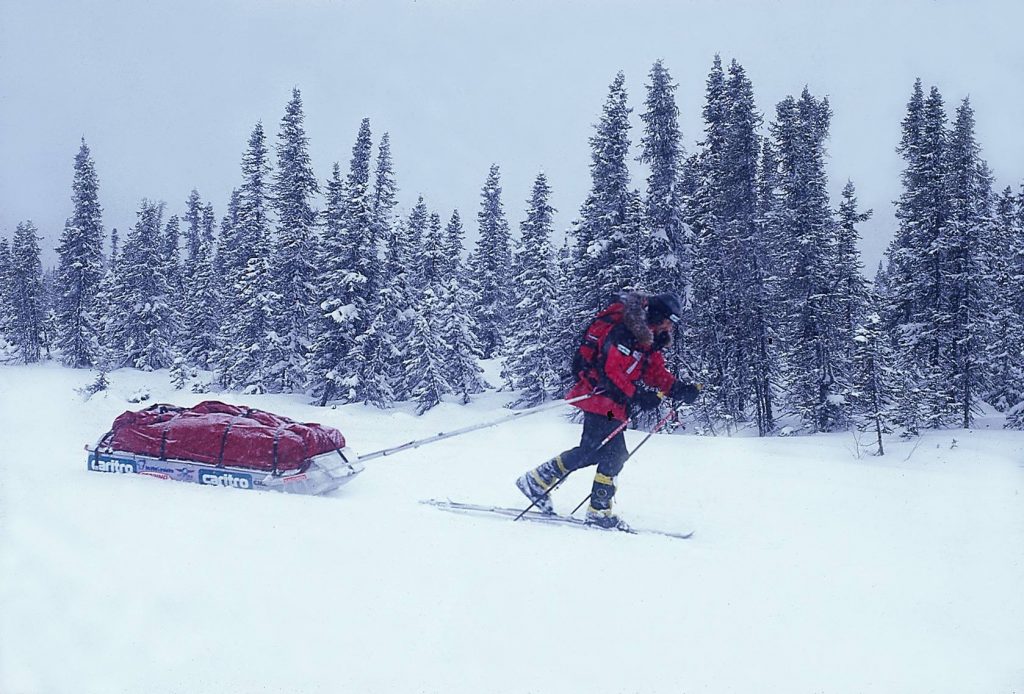 The venture– Alone, the first winter crossing of most of Alaska on skis hauling a sled, some 1100 kilometers from east to west to the Bearing Sea, in 47 days and without external support.

At 10.30 on 18 April I finally reached the town on Nome on the Bearing Sea.
It has been a very difficult and dangerous expedition with temperatures reaching 35-40°C below zero and significant temperature changes.

On 7 April I reached the coast of the Norton Bay and the continuation of the trip became a struggle, from -32°C the temperature raised up to 20°C in just 48 hours!!

These sudden temperature increases were a clear sign of an early spring: some 15-20 days ahead of time.

I left the Yukon River and the First Nation village of Kaltag on a cold and sunny morning, I crossed the Nulato Hills on the Kaltag Portage and reached the Inuit community of Unalakleet. Orientation troubles and very low visibility in this stretch. I had to unload the sled and portage the equipment to overcome many steep sections, and this cost me a lot of energies and time. At the end of the Kaltag Portage, before reaching the coast, I had to walk for hours under a pouring rain on very steep terrain and long parts with no snow dragging the sled behind me on grass and rocks.

For some 500 kilometers, until Nome, I tried to go faster with great hardships because of the new conditions that implied a sudden and dangerous increase in temperatures.

I walked on the frozen sea at sundown and at night, forcing myself to continue, often with nightmares and hallucinations. Hours and hours of fatigue, sleepless, only thinking about marching on as much as possible and with the fear of not reaching Nome. Early in the morning I had to move to the coast and stop my journey because I feared that my weight and that of the sled might crush the ice and make me fall into the water, as the thin ice surface started to thaw. Sunrays were already warm and I had to lie idle the whole day, trying to sleep in my tent until dawn, when I could continue because the temperatures went down again and the ice formed on the sea.

Unbelievable! Weeks and weeks of -20, -30, -40°C! Hundreds of kilometers in the Yukon riverbed crossing forests, icy lands, lonely areas, all by myself only thinking about the weather, that could change quickly, and beating my feet on the ice to warm me up and be able to sleep in the sled.
And now the warm season and spring thaw, so sudden and early!

In this last stretch I forced myself to march faster and I managed to cover 80 km in 21 hours, always at night, to wrap up the expedition in Nome with 17 hours of continuous walk to cover 90 km. In this last part, for hundreds of kilometers, I mostly walked on the lagoons and the icy surface of the Norton Bay. I often walked knee deep in the water, overflow or heavy snow, sometimes dragging the sled on ridges and hills in the almost completely snowless tundra.

So far I only feared frostbites, the terrible Arctic winds, the possibility of getting lost, but now I also have to watch out for grizzly bears, that were awaken by the warm weather and are roaming around hungry with their cubs.

I am so happy I made it to Nome and finally ended successfully this adventure.
I had to put all myself in this endeavor and maybe even more. I took some risks, felt the fear, I cried, but my good health, my knowledge of Alaska, and even some good luck, let me reach the final destination.
Thank you, Alaska!”