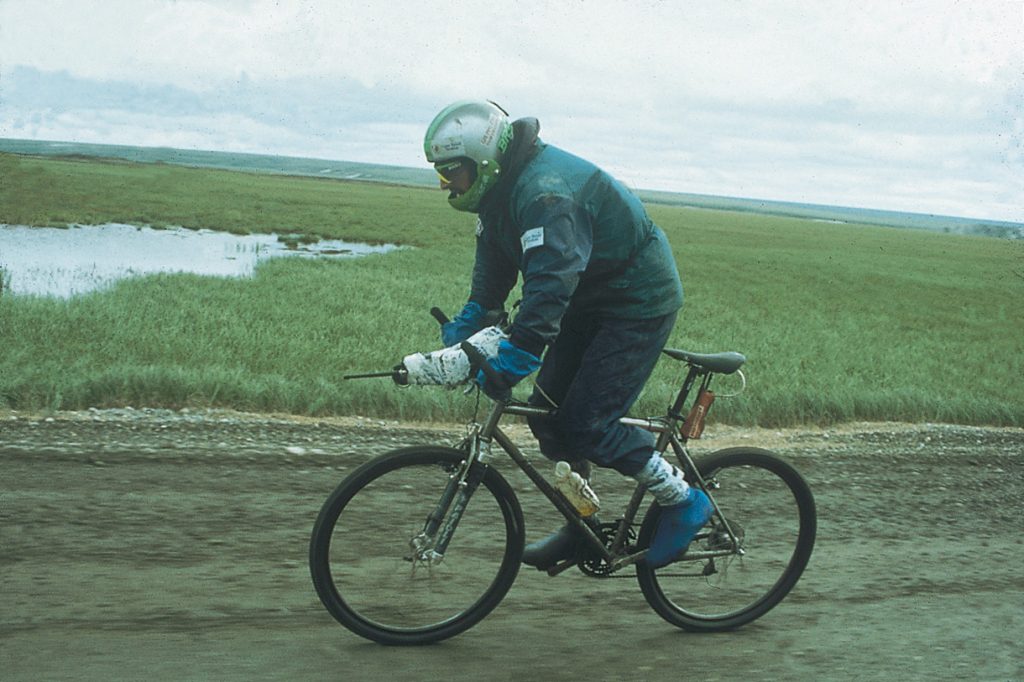 The Dalton Highway is Alaska’s northernmost road, one of the most extreme on Earth. I covered the 666 km from Livengood to Deadhorse/Prudhoe Bay in 76.30 hours. The Dalton Highway, a dirt and gravel road, rolls through the imposing Brooks Range, climbs up to 1400 meters – piedi? at Atigun Pass with 12% slopes, and there is only one place to get gas, food, or support of some kind.

Difficulties – the main difficulties were sleep deprivation during the performance, the harsh environmental and climate conditions and the dangerous large trucks that drive by at high speed. On the plus side, the long days of the Arctic summer and the hours of daylight helped me out. However, in the last stretches of the ride, it rained and snowed with temperatures at the foot of the Brooks Range that went from 25° to 0°C in few hours.

Training – I trained meticulously at home for months: my diet, riding schedule, recovery time and heart pace were decided by my physician after hours of work on the bike and in the gym. The psychological training was not easy, as I had to get used to “not sleeping”. With help and supervision from a psychologist and a neurologist, practicing autogenic training and doing specific exercises, I managed to gradually reduce the hours of sleep week after week until I could sleep 3-4 hours a night training normally, staying awake even 20 hours in a day.

History – this important communication route, which connects central Alaska to the extreme Arctic, was built in just 5 months in 1974, with a great deployment of men and means, as a service road during the construction of the Trans-Alaska Pipeline. 1300 kilometers long, it brings the oil extracted from the Arctic Coast to Valdez, on the Pacific Ocean; a great work of human engineering, it was built with enormous difficulties entirely on “permafrost”, the always frozen ground, through the alpine and arctic tundra of northern Alaska.