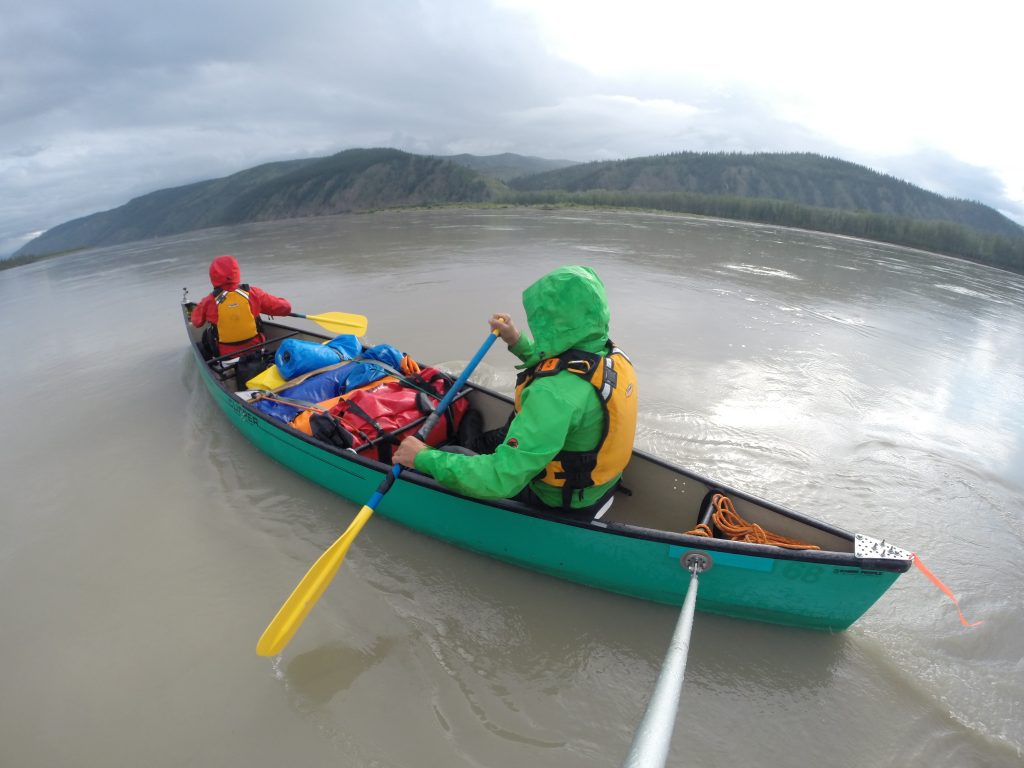 Adventure  – A canoe and minimal equipment to travel through one of the most scenic and wilder parts of a mighty river, the fourth in the world in terms of discharge: the Yukon, which runs for over 3100 kilometers from the Canadian territories where it has its source, through the great American North and the Yukon region from south to north, and Alaska from east to west, to finally empty into the Bering Sea with a large delta.

Favorable conditions – We trained physically and in a canoe on the Adige river, in Trentino, and thanks to the long days, good weather, and the excellent amount of water in the Yukon in that summer, we were able to make around 100 kilometers every day, sometime even 130, paddling up to 13 hours with no breaks.

Difficulties – Soon after our departure we had to face the first challenge: Lake Laberge. We had to cross this long and cold lake that is as vast as it is dangerous. Lake Laberge, 70 km long, is feared because bad weather can come all of a sudden and bring high waves, which with strong winds can make it very difficult to keep control of the canoe and increase the risks of crashing against the numerous superficial rocks. The water in the lake and Yukon river is very cold even in the summer and if you fall in it you survive for some minutes. We scouted the river from above and realized that there were many fast and dangerous currents that we could not avoid, with a large water discharge, so we decided to portage. We carried the heavy canoe on foot for over 1 km, it was a drag, climbing the river bank and walking through a thick forest.

Between nature and history – The first section of the river, a 735 km stretch from Whitehorse to Dawson City, is the most known. On its banks sometimes you can still spot the remains of cabins that were built by prospectors during the gold rush at the end of the 19th century and some of their belongings. The Yukon is rather narrow here and runs fast. After the village of Carmacks we approached the famous “Five Fingers Rapids”, which posed a huge risk to boats that traveled up to Dawson and the gold areas back at the time of the gold rush. We scouted the river from above and realized that there were many fast and dangerous currents that we could not avoid, with a large water discharge, so we decided to portage. We carried the heavy canoe on foot for about 1 km, it was a drag, climbing the river bank and walking through a thick forest.

National Park – In the second part of the expedition we crossed the “Yukon-Charley Rivers National Preserve”, one of the most famous natural parks in Alaska and North America. The protected area starts at the First Nations village of Eagle, just on the US-Canada border, and continues along the Yukon for other 250 km, the rest of our journey. In this vast, wild, and completely deserted place there are no roads, only some small First Nations communities up north where people still live off of hunting and fishing.